By Morphweasel2nd June 2015Uncategorised
No Comments 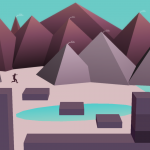 I wish I could stay at Digital Dreams for a bit longer. I’ve learned so much there and worked on two awesome projects. I also wish I could put all my work online that I did there, but there are some strict NDA’s that prevent me from doing that just yet. Since it’s a bit unclear how long I can stay at the company, I should keep my eyes open for work. (Disclaimer: the image on the right is a screenshot from Metrico, previously developed by Digital Dreams)

I would love to continue working as a game/level designer, preferably in a Dutch indie entertainment gamestudio. But there isn’t an awful lot of vacancies in that specific area. So that means I have to look at slightly different working fields that I’m also comfortable in, like 3D modelling or 2D art. Or that I should even look for jobs abroad.
These are exciting times, since I have no idea where I will end up in a month or so. But I do know I have the passion to become an awesome visual game designer and that I’ll try to contact just as awesome game studios from all over the globe (and comfy nearby). I’ve learned a lot from the folks at Digital Dreams and I feel like it’s about time to open the next chapter for me. I wonder where it will take me…